U.S. Faces a Severe Flu Season without an Effective Vaccine 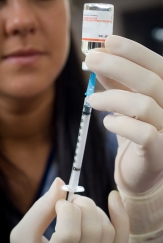 The Centers for Disease Control and Prevention just released some bad news for folks worried about getting the flu this year.

First, the agency reported that current data suggests the 2014-2015 flu season could be “severe.”

Then the CDC announced that this year’s flu vaccine may not be effective against the most common flu currently circulating the United States — the A (H3N2) strand. The CDC found that this year’s vaccine was a poor match for more than half the flu virus samples collected from October 1 through November 22.

The flu vaccine does still protect against other strands of the flu, such as the influenza A and B viruses.

The flu vaccine’s effectiveness may vary from year to year, but its side effects do not. Usually, the symptoms are mild, ranging from a runny nose to a sore throat.

In rare situations, a flu shot can have life-changing side effects.

For example, the flu vaccine can cause what’s known as Guillain-Barre Syndrome, a neurological disease that causes weakness and paralysis throughout one’s entire body. Usually, the symptoms of GBS begin in the legs before spreading. In about 10 percent of cases, GBS begins in a person’s arms or face. Other symptoms include unsteady walking, severe cramping that can worsen at night, and difficulty with bowel or bladder control.

The condition often requires immediate hospitalization. Fortunately, GBS only affects about one in every 100,000 people.

In even rarer situations, the flu vaccine can cause what’s known as Chronic Inflammatory Demyelinating Polyneuropathy. While similar to GBS, this neurological condition is characterized by a much slower onset of symptoms. Folks who suffer from CIDP usually experience difficulty walking — a condition that worsens over several months. They also lose control of their reflexes.

Fortunately, CIDP is rare. The disease afflicts between 1.5 and 3.6 people per million.

Folks who suffer from GBS, CIDP, or other flu-related injuries can get help from the federal government through the National Vaccine Injury Compensation Program.

Begun in 1988, the Program reimburses people hurt by a variety of vaccines. For the most up-to-date list, check out the vaccine injury table published by the U.S. Department of Health and Human Services.

Flu season is officially here — and it looks like it’ll be a doozy. Folks who have already gotten their flu vaccine should remember that the Program is available to help.

If you have experienced an adverse reaction such as Guillain-Barre Syndrome, or any other illness subsequent to receiving a vaccine, please contact us today. Vaccine attorney Leah Durant is available to provide you with a free telephone consultation. This vaccine attorney is a seasoned litigator whose practice is dedicated to serving those injured by vaccines.

Leah Durant is a former U.S. Department of Justice trial attorney who specializes in vaccine injury claims covered by the National Vaccine Injury Compensation Program. These cases are filed before the U.S. Court of Federal Claims (more commonly known as the “vaccine court”) in Washington, DC, where she has been admitted to practice since 2008. Originally from the Pacific Northwest, Leah Durant is a graduate of the University of Maryland College Park and received her law degree from the University of Maryland School of Law. Leah Durant’s legal practice concentrates on litigating complex vaccine injury and medical related cases. She has an extensive legal background and has experience representing individuals with complex medical claims.
View all posts by Leah Durant »
« Vaccine Court Continues to Help Families
Ebola Vaccine Makers Get a Shot of Immunity »