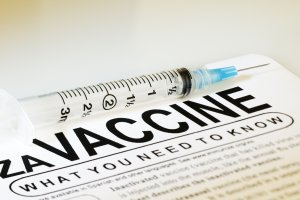 While vaccinations are perfectly safe for most people and carry many more benefits than risks, as with any medical procedure, treatment, or medication, there is always a small degree of risk associated with vaccination. In most cases, the side effects associated with receiving a vaccine are mild and brief and involve symptoms such as headache, fatigue, and soreness or irritation at the injection site.

In some rare cases, however, vaccinations can lead to much more serious consequences. Some vaccines have been linked with neurological disorders such as Guillain-Barre Syndrome, Transverse Myelitis, and acute disseminated encephalomyelitis.  Other vaccines have been linked to injuries such as: allergic reactions, shoulder injuries, seizures, inflammation of the brain, or even death.

What Is the National Vaccine Injury Compensation Program and How Does It Work?

The National Vaccine Injury Compensation Program (VICP), resulted from passage of a law called the National Childhood Vaccine Injury Act, which was passed by Congress in 1986.  The program was created to ensure vaccines remained available to the public, while allowing an efficient and less adversarial way for people hurt by vaccines to recover for their injuries.

The Law Offices of Leah V. Durant, PLLC, Answers Victims’ Questions and Represents Them in Court

For individuals who believe they have suffered an injury resulting from vaccination, the Vaccine Injury Compensation Program includes a fund that allows clients to recover for their injuries. This fund, is supported by an excise tax on most major vaccinations, recommended by the Centers for Disease Control and Prevention.

In order for individuals to recover damages for a vaccine injury, they must first file a claim with the U.S. Court of Federal Claims.  A Department of Justice attorney will be assigned to represent the government’s interest against your claim. Although the filing process does not require you to hire a vaccine lawyer to recover, it is highly recommended that you retain a vaccine attorney who is capable of representing your interests.

Generally, there are three types of people who may file a claim for compensation under the National Vaccine Injury Compensation Program.

In order for the claim to be valid, the injury in question must have lasted for six months or longer or must have resulted in hospitalization and surgery. Injuries that result in death are also eligible for a claim.

How Does Filing a Claim Work?

The U.S. Department of Health and Human Services, Health Resources and Services Administration provides detailed information how vaccine claims can be filed.  It is important to remember that there are statute of limitations associated with when a vaccine injury claim may be filed.  In order to be eligible for compensation, a vaccine injury claim must be filed within three years after the first symptom that the vaccine injury occurred. If the injury resulted in a death, the deadline is no later than two years after the death, and no later than four years after the beginning of the first symptom of the injury that ultimately resulted in the death.

All vaccine claims filed in the United States Court of Federal Claims and are decided by a Special Master from the Court.  Due to the complicated nature of vaccine litigation cases, representation by an attorney is highly recommended.

Leah Durant is a former U.S. Department of Justice trial attorney who specializes in vaccine injury claims covered by the National Vaccine Injury Compensation Program. These cases are filed before the U.S. Court of Federal Claims (more commonly known as the “vaccine court”) in Washington, DC, where she has been admitted to practice since 2008. Originally from the Pacific Northwest, Leah Durant is a graduate of the University of Maryland College Park and received her law degree from the University of Maryland School of Law. Leah Durant’s legal practice concentrates on litigating complex vaccine injury and medical related cases. She has an extensive legal background and has experience representing individuals with complex medical claims.
View all posts by Leah Durant »
« What is Shoulder Injury Related to Vaccine Administration (SIRVA)?
Whooping Cough Epidemic Worst in 50 Years »